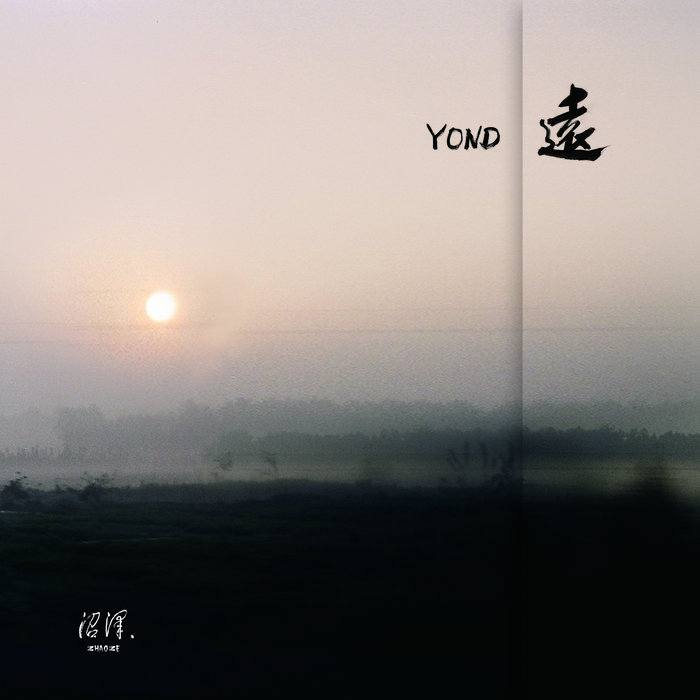 Even in the worldwide instrumental rock field, The band Zhaoze is unique in its own style.
Zhaoze released a magnificent, exquisite and touching instrumental concept album "Yond" in Sep. 2013.

From "close" of life, to "far" of imagination, the album "Yond" brings us strong contrasting feelings.
The music theme of "Yond" depends on the time and our city life, which is different from the leisurely poetic "Cang Lang Xing" or the pathos in "1911". However, these scenes and emotions closed to our life can freely reach a far side when imagination begins, giving us a feeling like the Chinese ancient poem described: "Where are the great men of the past, and where are those of future years? The sky and earth forever last; here and now I alone shed tears."

The chic design of the cover echo the connotation of the music——between the Chinese character “远”and the word "Yond", there is the open line, the inside page is a photo shooting the little rehearsal room meaning "close", when opening the outside page of the cover, we can see a full shot picture scroll of the road meaning "far side", each end of which can match together. The name of the album "远 - Yond" and the name of the single piece "离 - Leave" are two groups of synonym in Chinese and English. They both have same meaning and same pronunciation.
There's also a poem that Hoyliang wrote in the inside page, "the boundless two ends, may start from the same spot; while reaching each other's limits, will come back to the very beginning."

Opposition and contrast ideas are frequently used in music composition. Moreover, the new album has an full variety of arrangements, from ancient poetic style, post-rock, Psychedelic rock, ambient to electronic, of which the "close and far side", "ancient and today", "slow and fast", "noise and silent", "brief and complicate", are in conflict with each other while stay peacefully together.

Zhaoze has unique music instruments arrangement which is very distinct from other bands. They played Guqin in most of their music, even in an innovation- with a cello bow, of which the tone sounds like between the cello and Huqin, and mixes with Guqin’s own feature; What's more, they added distortion to the Guqin, dissonant chord, creative fingering and so on, attempting to echo the theme of album, and as well as the exploration of their music - Guqin can be inherited in a very modern and innovative way.
They also played other new instruments in this album, like 5-string bass, Xiao (a vertically-playing bamboo flute of China) and glockenspiel.
Hoyliang played guitar besides Guqin for some pieces in this album, including the whole song "The Metamorphosis". Jim played a mini keyboard also, and a refitted Guitar with ebow inside. The passion of the bass and the flexibility of the drum together build a strong strain sound bone for Zhaoze's music. The band members have being composing and playing music together for quite a long time, which makes them cooperate very well for each other, especially in most of the details.
Yond, can also be a span from inheritance to innovation.

The whole album lasts for one hour with 6 songs from different aspects to express what "yond" is. It may be an unfamiliar new world, an unknown future, or a lost dream, homeland where would never or cannot come back. It may also be the seemingly harmonious, a change of heart, longing and desperate, uproar and lonely... all will sound in "Yond", colliding with Zhaoze's music.

沼澤Zhaoze, the one and only, electrify Guqin (most traditional Chinese instrument), and combines it with Post-rock, Progressive rock and more, makes up a unique imaginative sound spectrum, to provide a soulful, dreaming and beautiful poetic world.